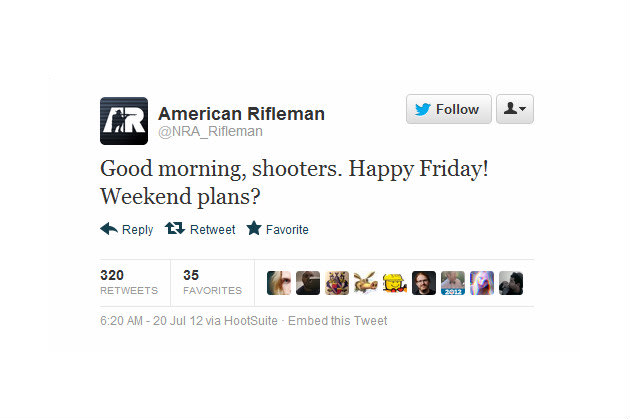 The shooter, I have nothing to say about, since there is already enough coverage on the story and it’s all sad, sick and irrational. However, two tweets have also made the front pages today and everyone involved in them should be ashamed of themselves.

In hindsight, the people who made the tweets should’ve stood their ground when the people who complained about them bashed because it isn’t like they meant to offend.

The news reporters, who were not involved at all, should have stayed out of it and kept their focus on the dramatic and tragic national event that had just happened.

Now for the public. I’ll take bets right now that the government is going to use their “never let a good crisis go to waste” and pull out an IMPOSSIBLY long document that they mysteriously wrote within a week to take as many liberties as physically possible. Hello?! Does anyone remember the Patriot Act!? I wont even bother discussing that one. No one cares about our freedoms (or lack of) anyway.
[youtube http://www.youtube.com/watch?v=1yeA_kHHLow]

See, when emotions run high in national emergencies, we lose our freedoms. They admit that RIGHT THERE.

“In 2009, 31,347 people were killed by firearms in the United States. That’s an average of 86 people a day. Already this year in Rochester, about 100 people have been shot. Six times as many people who were killed in Aurora today will die by gun violence today across the country.”

“Those killed in Aurora represent less than half a day’s quota of annual gun deaths in the US. Today is the rule, disguised as the exception.”

Oh, and the title? What’s the Availability Heuristic you say? Probably the most common thing that the idiots of America fall for. Why not Google that one. For more on the reactions of today, http://therochesterian.com/2012/07/20/gun-control-mass-shootings-and-pop-culture/